A Nigerian man, of Igbo tribe, has taken to social media to acknowledge the keen business orientation of the ethnic group that can’t be taught in an educational institution.

Okonkwo Ikenna, a 2D animator took to his Twitter page to share how he and his cousin both took different paths in pursuit of ambition years back.

According to Okonkwo, he gained admission to the university while his cousin followed his dad to the shop everyday. Fast forward to years later, Okonkwo’s cousin, who’s without a degree seems to have become an affluent man now that he even offered to buy Okonkwo a car so he can use for e-hailing services.

Okonkwo’s tweet has generated a conversation on the Twitter platform as people second his stance, that indeed “there’s something they in Igbo apprenticeship that can’t be learnt elsewhere“.

When I gained admission into university was same time my cousin started going to shop with his dad.

We spent same duration in both pursuit. Today, he wants to buy Uber for me to drive.

There’s something they teach them in that Igbo apprenticeship that you cant learn outside. 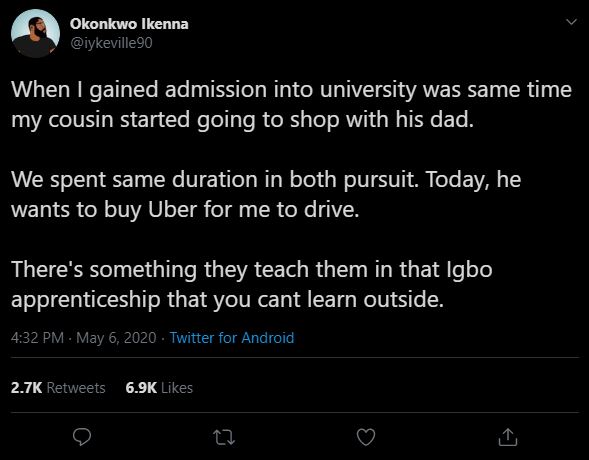