Following the detainment of popular music video director and producer, Clarence Peters by the Lagos State Police command over the death of professional dancer, Love Divine popularly known as Picture Kodak, his girlfriend of 14 years, Jennifer, has taken to social media to defend him. 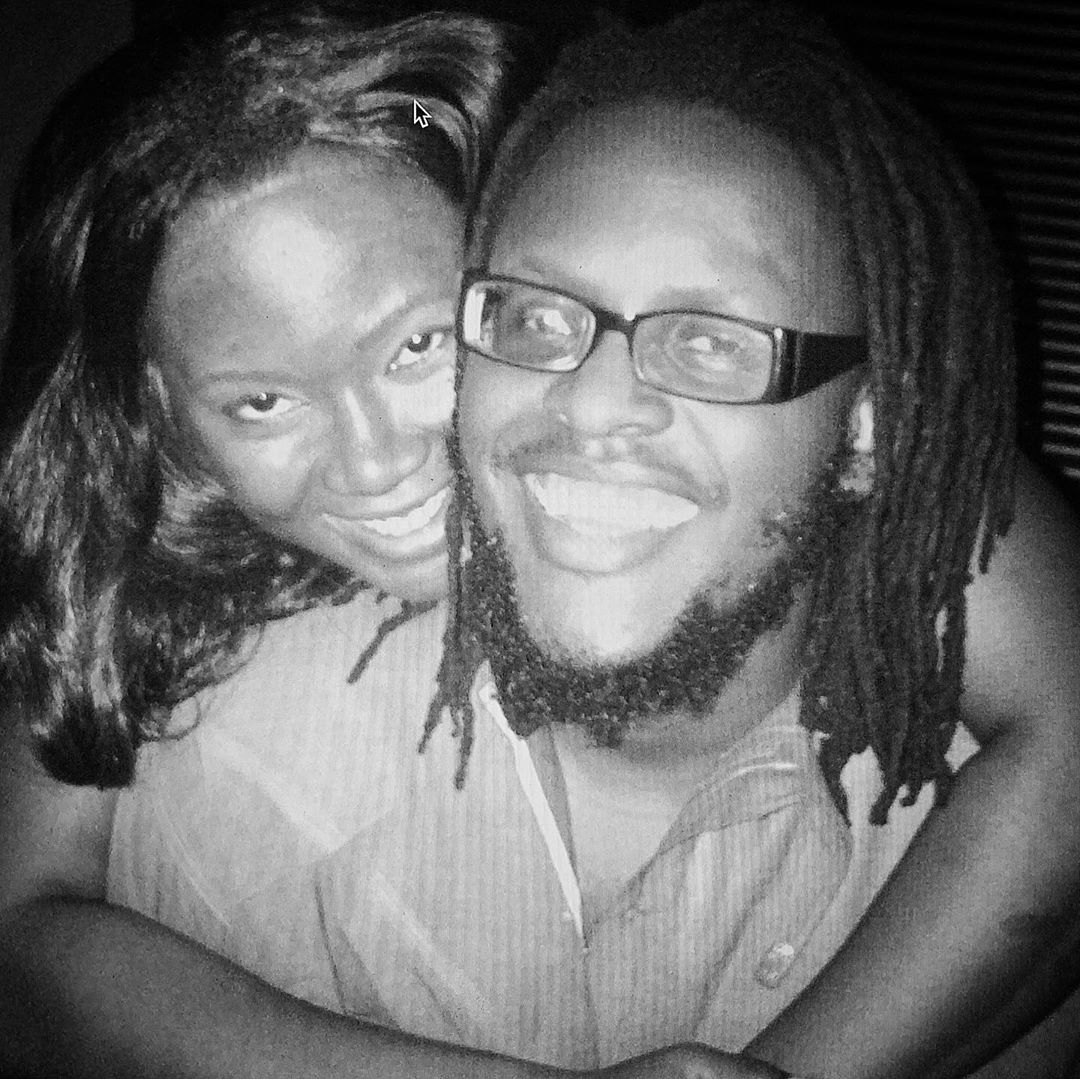 It was gathered that the music video director is being detained and questioned at the State Criminal Investigation and Intelligence Department (SCIID), Yaba.

Jennifer took to her page to air her displeasure over the development as she says the Nigerian police force are “destroying people’s reputation”.

In a lengthy write-up on her IG page, she addresses the report surrounding the detainment of her boyfriend as she says he was invited by the police and he went there willingly. 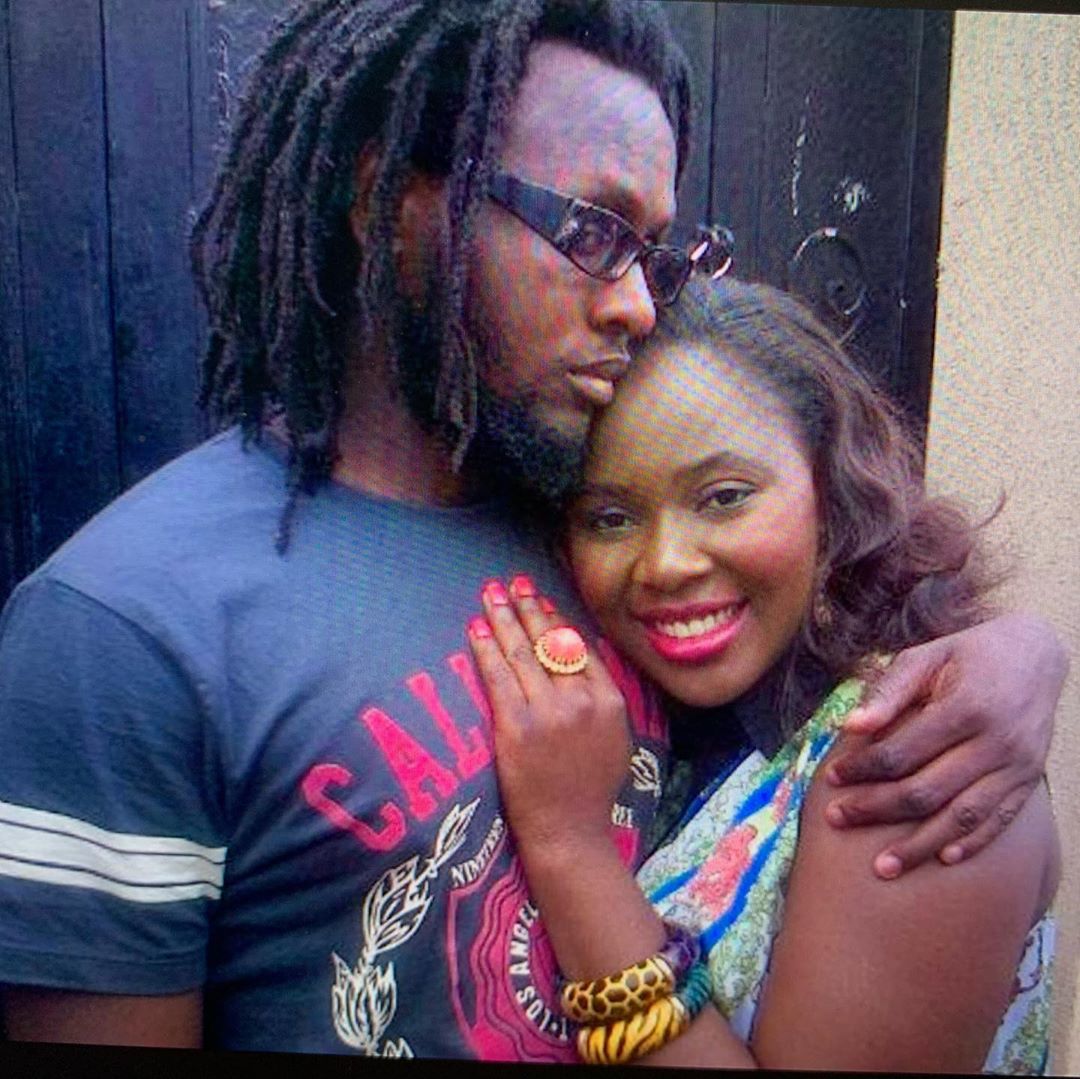 It is SICKENING the corruption and laxity in the NIGERIAN POLICE FORCE!
But First, lemme start with you the ones who follow blogs and comment without thinking. That someone earns a living from breaking homes and destroying people’s reputation is something that should naturally be worrisome to you but NO, it refreshes you.
So, as Clarence’s 14yrs long girlfriend, Lemme state AUTHORITATIVELY that CLARENCE PETERS was invited to police command, YABA and he went there willingly. He was NOT arrested, neither was he CHARGED WITH MURDER as stated by the press statement from the police command through their spokesperson BALA ELKANA!
Just because we chose to keep quiet until the autopsy result comes out before addressing the press and of course the police report to exonerate him was signed and collected.
On friday 2nd of May, 2020 an investigative team led by IPO, MR. POPOOLA, after the on-scene investigation was done, the body visited at the morgue, came to a conclusion they had no case with CLARENCE PETERS(who was not on the scene of incident) SEGUN the business manager, the 4dancers and two other members of staff of CAPITAL DREAMS PICTURES, (all referred to as witnesses), that it was a NATURAL ACCIDENT. He wrote his report to that effect. Events took a different turn when The DCP- YETUNDE LONGE, came in and asked that the report be torn, he wrote a second one that she tore again. By the third report, then came in MR. OYE and his father Sir Shina Peters and she couldn’t continue with her foul play. She agreed they had NO CASE with him and the rest of the witnesses. “So why are u still holding him..” everyone asked, she said she was waiting for the autopsy result so she can attach it. When she saw she had been caught, she sent them to put out a press statement that he was charged for murder. So thinking Nigerians, can someone be “CHARGED” without an autopsy conducted?
Backtrack a bit, after LD passed on, it took more than 24hrs to seek the consent from her family to conduct that autopsy. By the time the consent was gotten, due to the COVID-19 caused NIGERIAN COURTS CLOSURE, the autopsy was to start on monday being tomorrow. 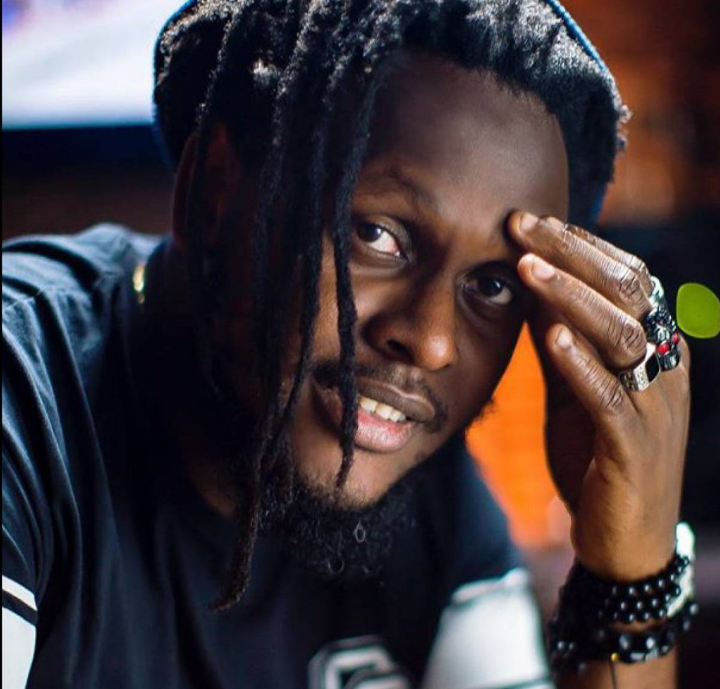 So again, how are we talking “he’s being charged for MURDER”??? Since they decided to throw the first blow of negativity, lets go ALL OUT with the information. You have all been waiting for a response from him and because he chose to be law abiding, someone who contributes positively to the nigerian economy, they want yo tarnish his name? And artistes, everyone is quiet? Nobody is asking questions other than “how can she be electrocuted”??? Is it right? Who is going to charge PHCN to court for the SURGE? Yetunde Alonge said if he was an ordinary person she would have let him go but because he and his parents are celebrities that is why.
Since u all seek to know of clarence “murdered” her, if clarence “raped” her, why can’t you all then march to PANTI and ask your police force questions. Don’t sit on blogs spilling fallacies and stamp your imprint by commenting ignorantly. We were going to wait for the results and her family but clearly, everyone is keeping quiet and dragging him in the mud. I WON’T! I have NEVER kept quiet in the face of ILLS, i won’t start now.
And to CP, Biodun stay strong cos THIS TOO SHALL PASS!!! 🤍ALWAYS and FOREVER!

And to EVERY BLOG who has gone out of their way to tell a lie- in the slide is the article posted by GLB, she took it down almost immediately before posting the witness’ account, how do we go from electrocution to RAPE? I don’t have an issue with an investigation as it NATURALLY, under NORMAL circumstances should be conducted anywhere in the world, BUT categorically alleging you know people he raped and abused is NOT sth to joke about. This is how people mIslead the ALREADY IGNORANT PUBLIC. Giving people a reason to form NEGATIVE opinions and i see people who i thought had sense making SNIDE remarks? You want to know how we landed here, it was all your commenting. So kudos to the blogs and YOU ESPECIALLY, the ignorant Lot.
An educative or informative post be put up, you wont see comments. When Dangote truck killed three of my aunts at once, there was no uproar. Then a NATURAL ACCIDENT will occur, u say it was MURDER!
May God forgive US ALL!
May His divine assistance remain always with us and may the souls of all the faithful departed through the mercy of God rest in peace, AMEN! 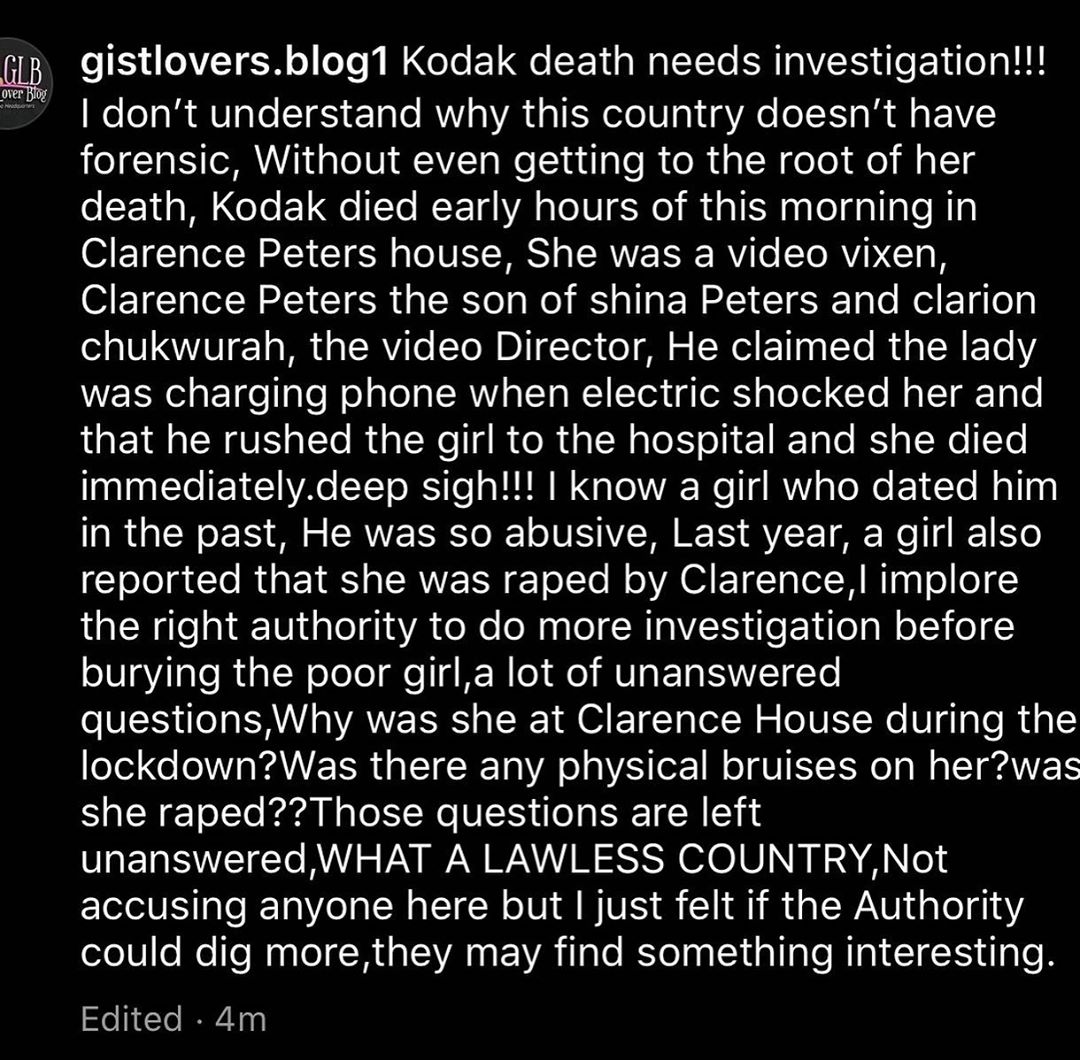 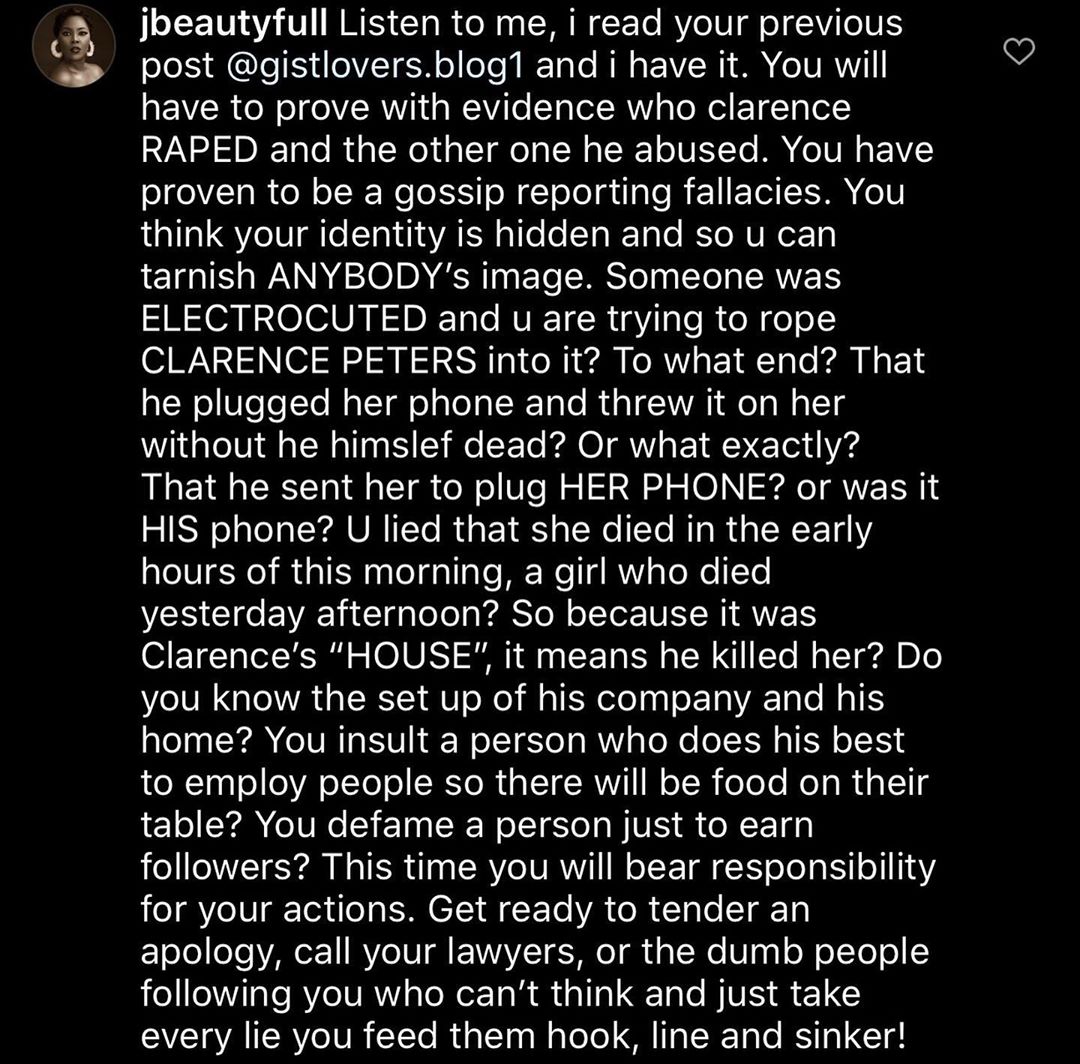